Reviews are frightening things. As an author, you run around trying to score them, then dread the negative ones.

“But negative reviews are inevitable,” some would say. “Why dread them?” Good point, and yet I do anyway for the simple reason that I want the reader to enjoy the book.  Not for ego gratification (although it would be dishonest to claim that a good review doesn’t lift the old writer ego), but because someone who reads a writer’s work invests something precious in it: their time and attention. I want the reader to have a good time. I feel bad when they do not, as if I have failed them.

However, despite all that build up and rambling about negative reviews, Paul Goat Allen enjoyed The Zero Dog War, so I’m running around telling everyone I know about his review. Paul Goat Allen is a man with an epic beard who has read a staggering amount of speculative fiction. So, yeah, I’m excited. Here’s some quotes I pulled:

“…yet another audacious blend of genre elements; The Zero Dog War is a ballsy fusion of military fiction, urban fantasy, and zombie fiction. Envision the classic 1967 war movie The Dirty Dozen…featuring a cast of paranormal fantasy characters…” 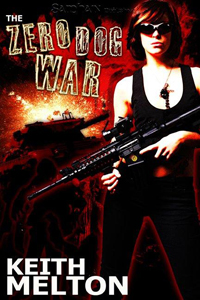